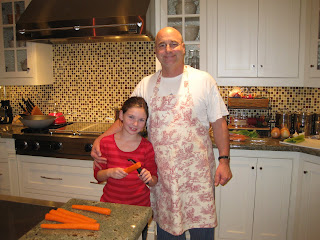 My husband Mark has perfected the making of our Thanksgiving Turkey and this year he has reached the Turkey Master Level of achievement. The Turkey has been hailed as the BEST TURKEY EVER by everyone who attended this years Thanksgiving Feast. It was moist, tender, full of flavor, and just plain brilliant. We will be talking about this turkey for years to come or at least until next Thanksgiving. Great JOB Mark, we all loved it and appreciate your efforts in preparing our TURKEY this year and in the past years!!!

Here is a play by play of the Turkey Master's preparations. You'll also get a glimpse of his Turkey apprentice, Kenna, helping with the vegetable cutting. 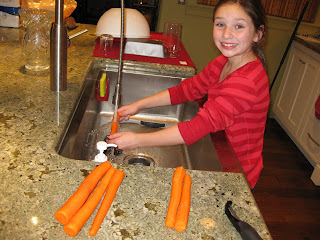 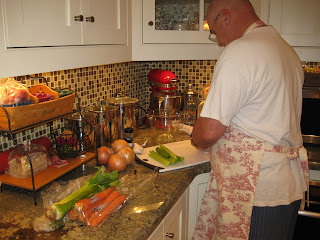 Mark is preparing the vegetables for brining. 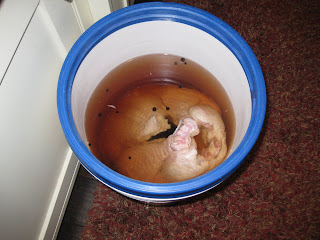 Here's the Turkey in it's brine.
It was in the brine for 12 hours. 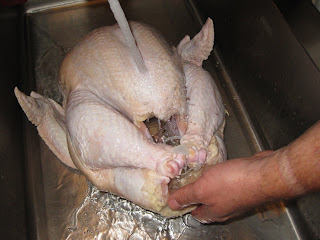 Rinsing the turkey before cooking. 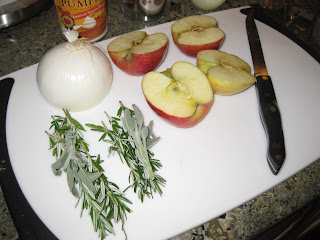 Adding the aromatics to the cavity of the turkey. That's one apple, half an onion, 3 sprigs of rosemary and one sprig of thyme. 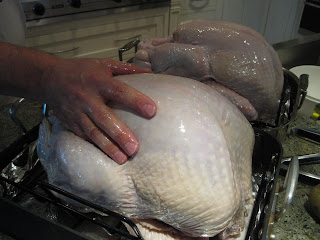 Applying canola oil to the turkeys. 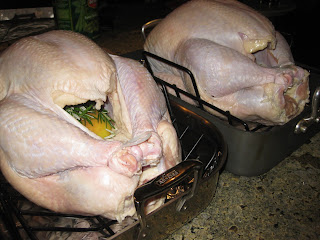 The two turkeys ready to go in the oven. 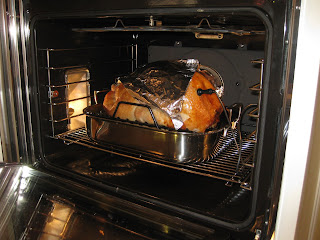 Here's the turkey after cooking for 30 minutes at 500 degrees. According to Alton Brown, the high temperature sears and seals in the juices. Then you reduce the temperature to 350 degrees for the remaining cooking time. Notice the tinfoil tent, this protects the breast meat from getting too brown and becoming over cooked. 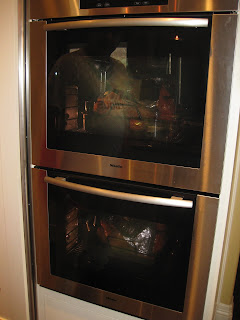 Turkeys in the oven. They cooked for an additional two hours until they reached 161 degrees. 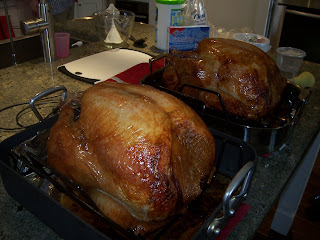 Here they are all ready to be carved. 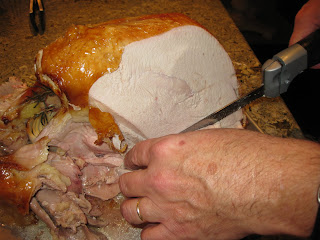 After watching Alton Brown of Good Eats on the Food Network he wanted to get a carving knife. So he looked them up on the internet, did his research and we headed down to Bed Bath & Beyond to buy a Cuisinart Carving Knife. It was really cool and has two blades. One for carving meat and the other for carving breads. Mark said it cut beautifully and wondered why he never bought one before this year. I think we just never thought about how cool it was to use and how nicely it cut the slices. 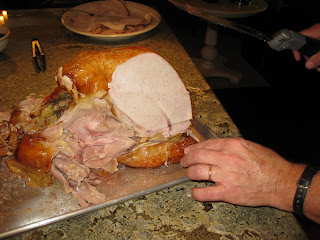 Another view of the turkey carving. 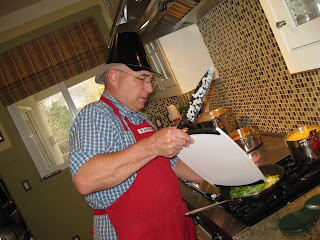 Mark is preparing the vegetables for the turkey stuffing.
Doesn't he look cute in his pilgrim hat?

All in All we had the most wonderful and relaxing day with our Family!
The food was EXCELLENT too!

Thanksgiving Bonus:
Here's the Recipe we followed this year and we think it's the best we've ever tried.

Combine all brine ingredients, except ice water, in a stockpot, and bring to a boil. Stir to dissolve solids, then remove from heat, cool to room temperature, and refrigerate until thoroughly chilled.

Early on the day of cooking, (or late the night before) combine the brine and ice water in a clean 5-gallon bucket. Place thawed turkey breast side down in brine, cover, and refrigerate or set in cool area (like a basement) for 6 hours. Turn turkey over once, half way through brining.

A few minutes before roasting, heat oven to 500 degrees. Combine the apple, onion, cinnamon stick, and cup of water in a microwave safe dish and microwave on high for 5 minutes.

Remove bird from brine and rinse inside and out with cold water. Discard brine.

Place bird on roasting rack inside wide, low pan and pat dry with paper towels. Add steeped aromatics to cavity along with rosemary and sage. Tuck back wings and coat whole bird liberally with canola (or other neutral) oil.

Roast on lowest level of the oven at 500 degrees F. for 30 minutes. Remove from oven and cover breast with double layer of aluminum foil, insert probe thermometer into thickest part of the breast and return to oven, reducing temperature to 350 degrees F. Set thermometer alarm (if available) to 161 degrees. A 14 to 16 pound bird should require a total of 2 to 2 1/2 hours of roasting. Let turkey rest, loosely covered for 15 minutes before carving.

You have a beautiful family Kim! And the turkey! My mouth is watering all over again. I never knew about startin at 500, I will keep that in mind for next year.
Laurie 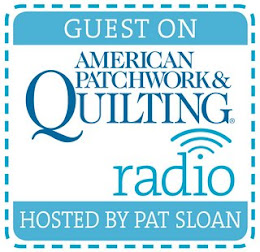 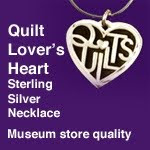 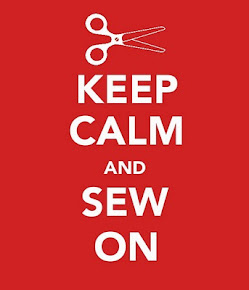 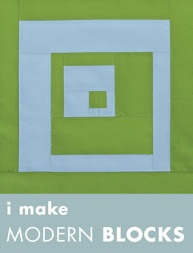 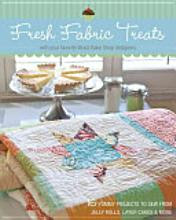 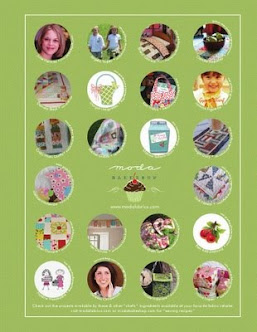 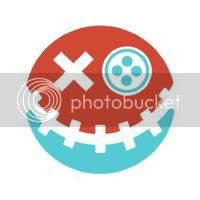